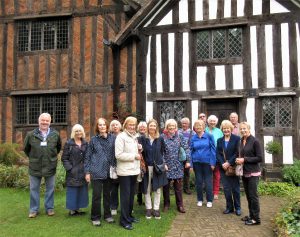 Monday 09 May Peter Bates will present The Inns and Coaching Houses of England explaining why medieval inns became so important and further developed in abundance along the network of England’s 18th and 19th century turnpike roads assisting the flow of coach travel and communication. It concludes with notable examples of several which have survived, and still flourish, in the 21st century. We look forward to seeing you in the Meeting Room of the Edward Marsh Centre for an 11.00 start. Refreshments are available from 10.45

Monday 23 May Sadly our trip to The Talbot Hotel will have to be postponed due to its current demise. We will instead visit Bewdley when Peter Bates will lead a short walk around the town concentrating on its use as an 18th/19th century coaching town including the George and the Wheatsheaf. We will finish with a visit to the Museum and lunch at the George (Wetherspoons). Please make your own transport arrangements and we will meet outside Tesco’s near the bridge at 11.00